The bitcoin mining industry had a year to remember in 2021, with exponential growth in the Western market led by publicly traded mining companies in Canada and the US, as well as the hashrate exodus from once-dominant China following the ban on cryptocurrencies and cryptocurrency mining by the Chinese Communist Party in June. Here are some of the top bitcoin mining trends and stat

The Chinese Communist Party banned cryptocurrency mining in June 2021, with just over 50% of the total bitcoin network hashrate being in China at the time. The previous all-time high was 180 EH/s, and hashrate dropped as low as 88 EH/s in the weeks following the ban. However, it recovered extremely fast—far faster than most people in the mining industry expected—and has since exceeded 212 EH/s (212 trillion computations per second!) at the new peak. By the time you’re reading this, it will probably already be higher.

4 miners are going public via SPACs for a total combined valuation of $13.1 billion

4 large bitcoin mining companies—Core Scientific, Bitdeer, Griid, and Prime Blockchain—are going public via SPACs (Special Purpose Acquisition Companies, essentially mergers) and becoming some of the most valuable mining companies in the world. The combined valuation of over $13 billion really goes to show that investors have a healthy appetite for the indirect exposure to bitcoin that these bitcoin mining stocks can provide.

According to the Q4 2021 report by the Bitcoin Mining Council (BMC), the energy consumption of the entire bitcoin network accounts for approximately 0.14% of all the world’s energy consumption. While it’s become common in recent years for bitcoin detractors to cite it’s estimated energy consumption as a reason for fear and outrage, putting it in this context gives a much more realistic overview of the true scale. In the end, it’s still little more than a rounding error and much of the attention placed on it would be better spent elsewhere. 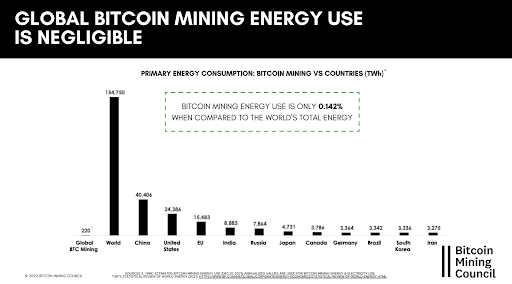 Bitcoin mining has an estimated 58.5% sustainable energy mix, higher than any other country or major industry in the world.

A feature of bitcoin mining that most of the world is yet to realize or understand is that it actually improves the economics for renewable energy production by enabling new renewable projects to immediately monetize before establishing grid connections and by acting as a demand response resource to soak up extra production from sources like solar and wind when the demand from the grid is too low to match the supply. In fact, we at MiningStore focus on this use case of plugging in bitcoin miners next to renewable energy sources to improve their economics.

The incredible hashrate growth to over 200 EH/s that we mentioned in the #1 mining trend is due in large part to the huge mining machine purchases made by publicly traded mining companies. The likes of Marathon, Riot Blockchain, Bitfarms, Argo, Iris Energy, Genesis Digital Assets, and several others have purchased a total of more than 650,000 new-generation bitcoin mining machines since the beginning of 2021. The most popular ASICs by far were from the Antminer S19 family manufactured by Bitmain, including several hundred thousand Antminer S19j Pro’s. With an average of over 100 TH/s per machine, these 650,000 mining rigs will be producing over 65 EH/s once they’ve all been deployed.

With all of those new-generation bitcoin ASIC’s getting delivered and deployed, the total combined hashrate of public bitcoin miners has surpassed 30 EH/s as of March 2022. To put that in context, 30 EH/s was the hashrate of the entire bitcoin network in mid-2018.

Transaction fees are averaging less than 2% of total mining rewards in the past year.

Total mining revenue per day is averaging > $40MM in the past year.

A much more positive long-term trend for bitcoin miners is that the total daily revenue for the past year is average around $40 million per day. Daily mining revenue peaked at $78 million as bitcoin first reached all-time highs above $60k in April 2021, but it has since found a steady range between $30-50 million so far in late 2021 and early 2022.

The bitcoin mining industry has certainly matured a lot in the past year, but it’s still one of the more volatile and unpredictable businesses out there. A key metric for mining profitability, hashprice, is a measure of the daily revenue that miners earn per terahash per second ($/TH/s/day) of computing power they operate. When BTC price increases, it increases hashprice. However, increasing network difficulty has the opposite effect, decreasing the BTC mined per terahash and thus the hashprice. Miners are always hoping that BTC price will increase faster than difficulty so that their revenue can increase over time.

As we detailed in our comparison of the Antminer S19 Pro and Antminer S19 XP, there was a massive efficiency improvement between these two cutting-edge mining machines. Many people expected that efficiency gains would slow drastically after the Antminer S19 Pro was first to achieve sub-30 J/TH efficiency, but it seems that we aren’t going to approach the limits of Moore’s Law for bitcoin ASICs just yet. This 27% efficiency increase also likely means that the trend of rapidly increasing network hashrate isn’t going to slow down anytime soon.

The United States share of global hashrate increased from an estimated 10% in January 2021 to 35% just 8 months later.

According to data from the Cambridge Center for Alternative Finance, the United States increased its market share in bitcoin mining from an estimated 10% of total network hashrate in January 2021 to 35% by September 2021, the most recent update of the data. This data is only collected from a few mining pools and it can be distorted in case miners are masking their IP addresses by running VPNs or other proxies, so it should be taken with a grain of salt. Nonetheless, it’s clear that the US has become the preferred destination for bitcoin miners in 2021 and 2022.

The fluctuation of bitcoin mining machine prices was wild to experience in 2021, making it very difficult for miners to make confident investments in ASICs. For the popular Antminer S19 series, prices fluctuated from below $3k in late 2020 to a peak of $12k in early 2021, and then briefly back below $7k following the China mining ban when many Chinese miners liquidated their hardware inventories.

Non-Chinese bitcoin mining pools increased their combined market share from <10% at the beginning of 2021 to >30% by March 2022.

At the beginning of 2021, over 90% of bitcoin’s total network hashrate was going through Chinese mining pools. Now, as of March 2022, non-Chinese pools including Foundry Pool, Slush Pool, SBI Crypto Pool, Luxor, and MARA Pool have a combined market share of 31.2% based on blocks found in the past 5 weeks.

Intel became the first non-Chinese company to make a serious entry into bitcoin mining hardware manufacturing with their 2022 release of a new bitcoin ASIC mining chip, the BMZ2.

Perhaps the most significant market trend in bitcoin mining for 2022 was the emergence of viable hardware manufacturers outside of China. Block (formerly Square) announced that they would begin the multi-year process of manufacturing their own bitcoin mining rigs, while computing giant Intel made some much more tangible progress with the 2022 release of their new ASIC mining chip, the BMZ2. If it can live up to the announced specs of 135 TH/s and 26 J/TH efficiency, it will be the first competitive mining hardware to be manufactured outside of China since the ASIC era of bitcoin mining began in 2014.

An S19 Pro plugged in for the entire year of 2021 mined approximately 0.25 BTC at an average marginal cost of production of $4890 per BTC. 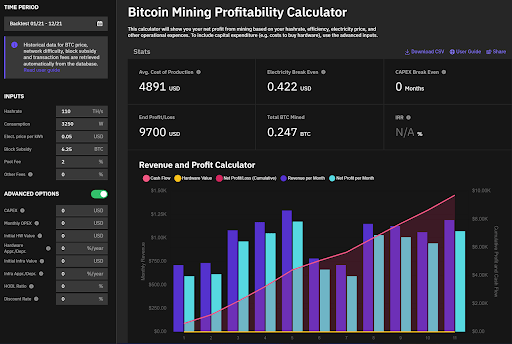 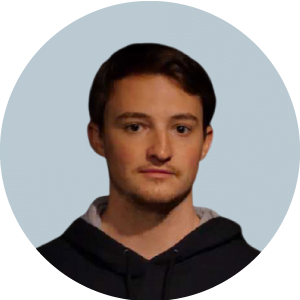