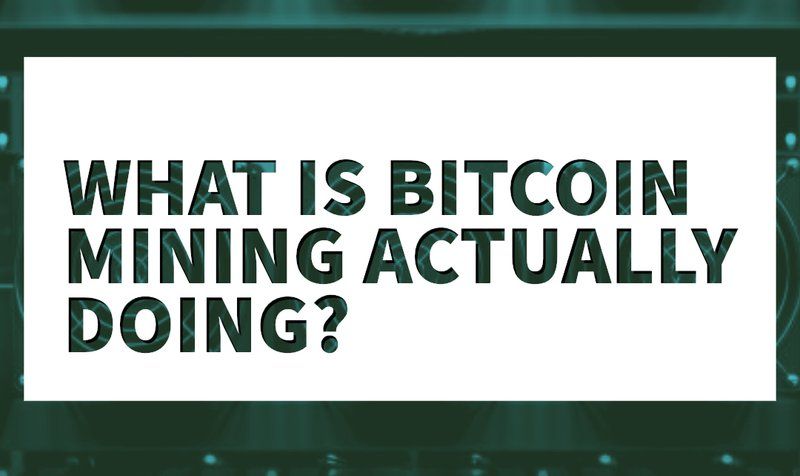 What Is Bitcoin Mining Actually Doing?

Bitcoin mining is the act of using specialized computer hardware to verify transactions on Bitcoin’s Blockchain network, an open and public ledger that cannot be altered, but what exactly does that mean? What’s actually happening behind the scenes when one is mining Bitcoin? If you’re still new to the idea of cryptocurrencies like Bitcoin, the inner workings can seem a bit hard to grasp, but that’s where we come in.

To be a little more accurate, Bitcoin mining is the act of solving complex “proof of work” algorithms to verify when someone sends Bitcoin to another person; how much, to whom, and ensuring sure the portion of Bitcoin changing hands hasn’t already been sent somewhere else. In exchange for lending their computing power to the network, Bitcoin miners are rewarded via transaction fees, and when new blocks of information are created. We’ll get a little more into that soon.

All the information about every Bitcoin transaction is recorded into what’s known as a blockchain. Put simply, a blockchain is a chain of data blocks. When a transaction is put forth, an encrypted packet of data is created, called a hash, and Bitcoin miners work to decrypt the information and find the 64 digit solution to the mathematical problem.

When a hash is solved, the Bitcoin miners pass the information into a block on the public ledger. When a block fills up, a small bit of information about the previous block is also included before the ledger starts recording to a new block, in order to ensure the integrity of all future blocks.

It used to be that anyone with a dusty old laptop could potentially produce enough power to solve the equations and receive rewards. These days, though, a single Bitcoin miner working alone will need to be very powerful in order to find the solution before others do. The constant fluctuation in difficulty can make it very challenging for a single computer to quickly solve the algorithm, so many people have come together into what is known as “bitcoin mining pools.” A mining pool is where everyone lends their computing power to a single source and share any rewards generated by the pool based on how much hash power each miner contributed. To learn more about pools read our blog post, [Different Bitcoin Mining Pools For 2019?].

There is a finite number of Bitcoin that will ever be produced. 21 million in total to be exact. The term “mining” can be thought of like chipping away at the mountain of Bitcoin that is left to be gathered. Your computer can’t swing a pick though, and it wouldn’t need one anyway.

Every time a new block is recorded into the chain, a number of Bitcoin are generated and given to the miner(s) that completed the proof of work. When the Bitcoin blockchain was first started in 2009, the reward for Bitcoin mining was 50 Bitcoin per block, however, for every 210,000 blocks that are produced, or roughly every 4 years, the number of Bitcoin awarded per block decreases by 50%. After 64 of these “halvings”, the Bitcoin mining reward will drop to 0, meaning no new coins will be produced, and all 21 million Bitcoin will be in circulation. If the rate of block production remains steady, the final Bitcoin will be mined sometime around the year 2140, so you’ve still got plenty of time to get into the game! To learn how long it would take to mine a full Bitcoin, click here!

Bitcoin mining will still be incentivized, though, as a very small portion of all transactions on the network are shared with the miners that helped verify the transfer of value. This will ensure that there are always resources available to keep the network running smoothly.

Bitcoin Mining Is Like Giving Your Computer A Job!

All the technical details can seem overwhelming at first, but in a nutshell, Bitcoin mining is like telling your computer to solve math problems for money, while helping to keep the entire network moving along so that people are able to send Bitcoin anywhere in the world in a matter of minutes. Pretty awesome if you ask me. To read about the best Bitcoin mining hardware of 2019 click here!

Join our MiningStore newsletter to receive industry information, insight on the most profitable ways to mine, and our predictions for the future of cryptocurrency mining! (PS… we are giving away a few FREE Bitcoin miners to fight the bear market gloom… don't miss your chance!)