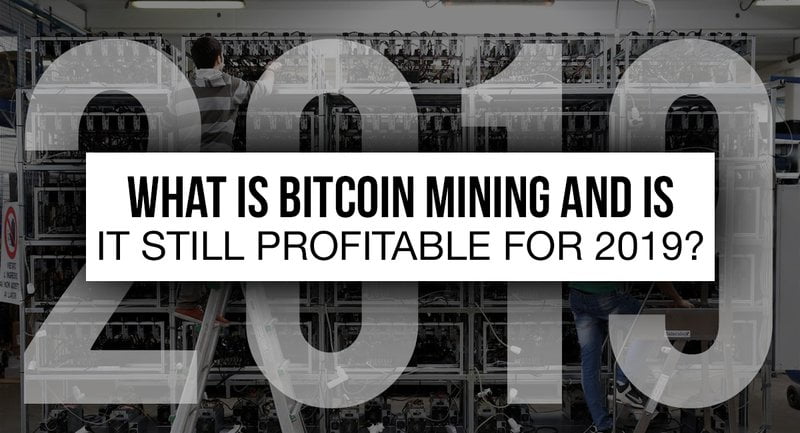 What is Bitcoin Mining and Is It Still Profitable

Find out the process of Bitcoin Mining and our thoughts on 2019 profits!
Bitcoin, the most widely used and valuable cryptocurrency in the world, is driven by a process called Bitcoin mining. Defined by three key characteristics, Bitcoin is transparent, immutable, and most importantly, completely decentralized. The decentralized nature of Bitcoin means that it isn’t issued or managed by any centralized authority — instead, the ledger that keeps track of all Bitcoin balances and transactions is managed in a collaborative manner by tens of thousands of Bitcoin Miners around the world.

These participants help to secure and maintain the Bitcoin network through “mining.” Bitcoin miners are rewarded for their contribution in the form of Bitcoin. The Bitcoin mining industry is relatively complex, and requires dedicated hardware, but can be extremely profitable —Bitmain, the world’s largest Bitcoin mining organization, generated over $1 billion USD in profits in the first quarter of 2018 alone.

Volatile cryptocurrency markets, the increasing dominance of large-scale mining “pools,” and increasing operational costs, however, have dramatically altered the profitability of Bitcoin mining for independent miners over the course of 2018. Is Bitcoin mining still profitable in 2019?

What is Bitcoin Mining?

Bitcoin miners make sure that transactions added to the ledger are genuine and record them in an immutable manner through mining. Mining is performed by extremely powerful computers that solve complex equations in order to render the Bitcoin ledger is cryptographically secure.

For the average miner, this means operating and maintaining dedicated hardware that consumes a large amount of electricity. The profitability of Bitcoin mining is calculated by balancing the cost of operating this hardware versus the reward given to miners that contribute to the Bitcoin network.

Some miners choose to work together in groups, sharing computing power in a “pool” of miners that also share the block reward. This has led to the creation of large-scale mining companies such as Bitmain and F2Pool, who operate massive mining operations in data centers across the world.

How Does Bitcoin Mining Work?

To make sure miners don’t attempt to include fraudulent transactions in a block, all blocks are validated by other network participants. If the block is rejected, all of the time and energy invested in solving the block is wasted.

How is Bitcoin Mining Profitability Calculated?

Bitcoin mining profitability is calculated in a relatively simple manner — operational costs versus reward. The likelihood of reward, however, depends on a number of factors.

Bitcoin mining hardware prices have increased significantly from the earliest days of the Bitcoin network. Bitcoin mining is now performed with specialized hardware — Application Specific Integrated Chip (ASIC) devices, which can in some cases cost thousands of dollars.

A hash is the complex mathematical problem solved by Bitcoin mining hardware. A hash rate is a measure of how fast a miner is able to solve these problems. A higher hash rate increases the likelihood of solving a block and subsequently receiving the block reward.

As the reward for solving a block is delivered in Bitcoin, the price of Bitcoin plays an important role in calculating Bitcoin profitability. In late 2017, Bitcoin prices ran as high as $20,000 USD, making mining extremely profitable. Q1 2019 Bitcoin prices have made calculating margins extremely important for Bitcoin miners seeking to generate profit.

Miners that choose to participate in a mining pool must pay a fee to the pool for the service it provides, which ranges between 1.5% and 3%.

Power is the most important overhead for Bitcoin miners, as ASIC units have an extremely high power draw. It’s essential for miners to calculate the per kilowatt rate of electricity in the region they are in, as Bitcoin mining hardware incurs both electricity and cooling costs.

Assessing the above factors when considering the profitability of a Bitcoin mining operation is essential. Many large-scale mining operations choose to establish data centers in regions that offer low electricity costs, such as China, or in places in which cooling costs are minimized, such as Iceland. For individual miners, however, hosted Bitcoin mining solutions are rapidly becoming a far more cost-effective option in 2019.

Bitcoin cloud mining allows miners to rent mining power directly from data centers but is not the most cost-effective solution for miners in 2019. Hosted mining, however, allows miners to maximize the profits delivered by their mining hardware by hosting it in a secure location that delivers rack space, power, networking, and cooling solutions — dramatically lowering operational costs.