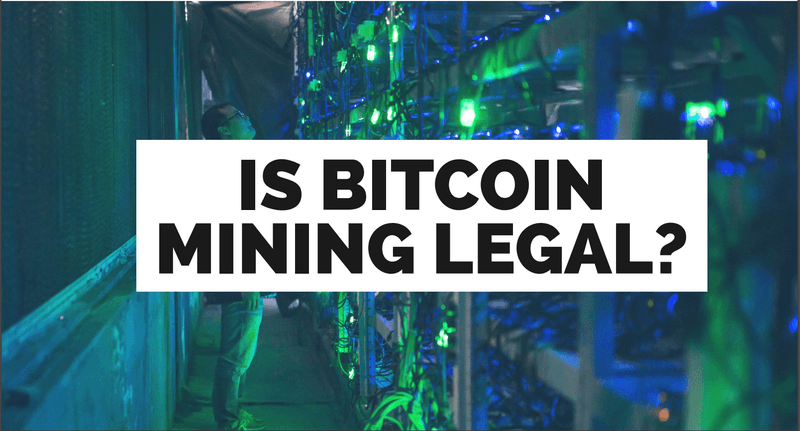 If you are reading this, then you are most likely aware of Bitcoin mining and the relative software miners needed in order to connect their hardware. (If you are new to mining, see here: What Is Bitcoin Mining?) If you are planning to start with Bitcoin mining and have stuck around with its legality, then in short, it is perfectly legal!

Well, this is the case with the majority of countries. Legality of Bitcoin mining and using Bitcoin for conducting transactions varies from one jurisdiction to another. When it comes to countries such as America, China, Japan or South Korea then mining here is mostly legal. But for some countries such as Russia, you might better not try!

As a miner, you might wonder as to why governments ban Bitcoin and other digital assets like it. The answer is simple; it is because of the power it consumes for mining and the impact it can have on local currency. Besides, China did a crackdown on Bitcoin exchanges back in early 2018 stating that they are a threat to the national currency and the banking sector itself.

Many people use to believe and speculate about Bitcoin mining getting criminalized by governments. But instead, the majority of them have turned friendly towards Crypto. In addition, Bitcoin is not regarded as normal currency by governments. Instead, it is deemed as an asset or property subject to capital gain tax.

Many countries have not outlawed Bitcoin and Cryptos entirely except for a few. Others are mainly silent and people use the silence of law to their advantage..

Many criticized Bitcoin as a waste of energy and harm for environment but certainly there are more benefits when it comes to Bitcoin mining. Enabling a monetary system worth millions, it is safe to say that Bitcoin have the charm to easily replace several online payment institutions. So…

…why would the government take sides on Bitcoin’s legality?

When it comes to mining, a lot of factors come to play. Many countries can feel pressure to ban them on political, economic or even religious grounds, but here are some factors that highly influence the decision they make

Bitcoin mining provides additional revenue for the government. Miners who make decent profits from their ASIC mine software are liable to tax in many countries such as Australia and America etc.

Governments are clever and they are always looking to have some share from your side income. Why would they ban Bitcoin mining when it allows them to earn some additional revenue? Although, this might look like a factor to completely regularize the mining industry but then there comes the impact of power-hungry hardware that miner use to mint the coins.

Many developing countries face power shortfall. While others suffer from the high cost of production when it comes to electricity. Bitcoin mining is a power hungry venture and requires a lot of energy consumption. A report from Elite Fixtures gives us more insights as to how the cost of mining one single Bitcoin can range from $550 to a whopping $20000 depending on the country of your residence.

Majority of countries fall above $10000 cost range. This means Bitcoin miners are left with only a few options to relocate their farms and maintain their profits in case it becomes illegal to mine Bitcoins in their own. On the other hand with countries having additional power in their grid can greatly benefit from legalizing Cryptocurrency mining.

Perhaps, this is also one of the main reasons as to why the majority of Bitcoin miners are located in regions where power is relatively cheap and the access to the hardware for mining Bitcoins readily available.

Bitcoin miners are hungry for the cheap power sources. Perhaps, this is the main reason why many miners have relocated to places like Iceland or Venezuela where average mining cost is pretty low. But don’t pack your bags for Venezuela quite yet, since the country is struggling from major economic crisis. In addition, many governments are seeing Bitcoin mining as a growing industry and are focusing to use it for their economic benefits.

A booming industry fetches more investment and many governments such as Japan and South Korea have already cashed-in this opportunity. In addition, countries such as Iceland are providing incentives to miners for relocating their mining farm there.

What are countries where Bitcoin is illegal?

There are certain nations that have placed an explicit ban the use of Bitcoin. These particularly include:

For Russia, banning Bitcoin is more than just prohibiting it for local people and business. Lately, the country got hit hard with sanctions because of its activities in Ukraine. And as a result, the local currency came under pressure. While struggling with the economic crisis due to low oil prices andtrade restrictions, Russia sees Bitcoin as a threat to the economy. The rubble has suffered massive inflation in comparison to the United States Dollar and the country wants to control all means of money laundering and keep its foreign reserves intact.

But here is another interesting country that has banned Bitcoin but operates its own Cryptocurrency backed by United States Dollar. Any guess? Well, this is Ecuador!

The country explicitly banned Bitcoin and every other cryptocurrency because of the establishment of their own Cryptocurrency directly pegged to USD. Well, I guess nobody wants Bitcoin to compete with them.

Although, Bitcoin activities are hard to ban since it is a peer to peer network and exchanges such as Localbitcoins can easily help people get their hands on some Bitcoins.

You might be thinking as to whether there are laws in your country legalizing Bitcoin mining. Instead of running into complexities and contacting your lawyer about Bitcoin mining, how about focusing more on the hardware you will use to mine your very own Cryptocurrencies? We have pretty much of them available at our store.

Even though Bitcoin mining is legal in many countries, but one should also consider the impact it can have on the stakeholders, especially environment impact Once a local community in New York filed an official complaint to police about a mining farm taking advantage of cheap electricity in their neighborhood. The result? Authorities requested them to halt their operation.

If you have finished digging about the legality of Bitcoin in your jurisprudence, then maybe it is time to analyze some external factors you should consider before firing up your ASIC hardware. Your ASIC miner is probably going to make a lot of noise. Besides, if you are living somewhere in a tropical country than additional investment for keeping the area cool would also be required.

In addition, many countries, mostly in Africa, haven’t pass any laws regarding Cryptocurrencies and Bitcoin mining. Further, the law is silent about virtual assets. If you are a person living in such a country, then it is better to keep an eye on your laws about Bitcoin mining since legalization might hit you while in sleep.

In contrast, if you are someone residing in a place where Bitcoin mining is largely legal, then it is time to reach out to your local communities and ask about the tax complications involve.

Please mind that the above doesn’t constitute as a piece of legal advice. You should consult a lawyer or any other Cryptocurrency professional to be more specific about the legalization of Bitcoin mining and its usage in your country.